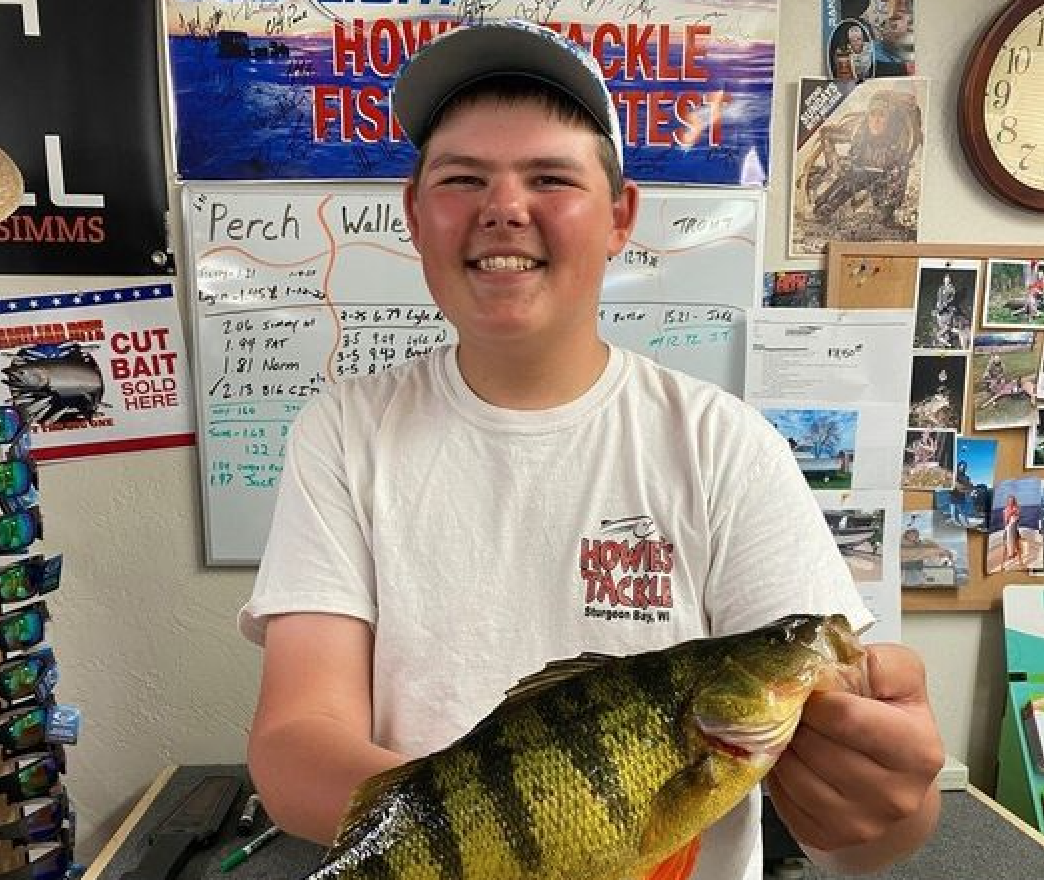 Jack Konop recently landed this giant 15.25-inch, 1.97-pound perch. He weighed it in for the monthly fishing contest at Howie’s Tackle & Archery in Sturgeon Bay. Photo courtesy of Howie’s.

Lance LaVine of Howie’s Tackle & Archery in Sturgeon Bay said the perch fishing was so good that many boat anglers were able to land limits of 15 fish. Smaller numbers – but enough for a meal if you’re patient and lucky – are usually caught ashore.

The best depths can range from five to 15 feet in the weeds, 10 to 25 feet on the reefs, and 20 to 40 feet on the mudflats. Worms, night crawlers, minnows and other live bait work best, but jigs can also be effective.

If you have too many goby bites, pull your bait out from the bottom a foot or two. Perch will easily move through clear water to grab your offering, but gobies are less likely to do so.

Get tickets to the Kewaunee/Door County Salmon Tournament

Anglers who purchase an entry ticket to the Kewaunee/Door County Salmon Tournament (K/D) by the end of the day on July 10 will have a chance to win one of eight $100 gift certificates that will be offered July 11.

Tickets — $30 for the entire tournament from July 15-24, or $20 for a one-day shot — are available at B&K Bait and Tackle in Kap’s Marina on Washington Island; Baileys 57 at Baileys Harbour; JP Express north of Carlsville; Howie’s Tackle & Archery and Greystone Castle, both in Sturgeon Bay; Algoma BP and JP Express in Algoma (a $100 winner will be combined into one drawing at both locations); and Accurate Marine & Tackle and Center Court BP, both in Kewaunee.

All tickets also include a raffle chance for a 9.9 horsepower Yamaha outboard motor from Shipyard Island Marina. A winner will be chosen at the K/D wrap-up meeting on July 26.

A new bill introduced by Representative Andrew Clyde (R) of Georgia targets the largest source of conservation funding in the country.

More than 50 co-sponsors, all Republicans, have signed on, including Wisconsin’s Glenn Grothman and Tom Tiffany.

Generating funds from alternative sources — if that’s even a possibility, as a number of other programs are already tapping into energy leases — could mean a lost seat at the decision-making table for recreational hunters and shooters.

The bill is criticized by a number of gun rights groups, including the National Shooting Sports Foundation (NSSF). A spokesman for the NSSF says it is woefully flawed legislation and the North American model of wildlife conservation is the envy of the world because of investments made by arms manufacturers fire and ammunition.

The PR Act has been in effect since 1937 and is used by state wildlife agencies as the primary source of funding for wildlife management and habitat improvement on public lands.

Summer is a great time to spot whitetail deer from a distance, but there’s no guarantee the bucks you see now will be in the same spot during bow and crossbow hunting seasons. Still, with deer under less pressure and a strong need to put on weight as fall approaches, summer provides an opportunity to at least get a feel for what’s going on.

The velvet-covered antlers of the males grow rapidly, and the animals usually travel in bachelor groups. Now until September is the only time you will see so many wild males huddled together.

During this time, broods of wild turkeys are active. Young poults can fly to safe roosting branches within two weeks of birth. However, the high number of nest robbers such as raccoons, possums, skunks, foxes and coyotes means you may still find a hen sitting on eggs after her first or second attempt fails. .

As of July 1, Lake Michigan water levels had risen an inch from early June, but were down six inches from last summer. Lake levels were still 41 inches above the record monthly low set in 1964, but 25 inches below the July 2020 record.