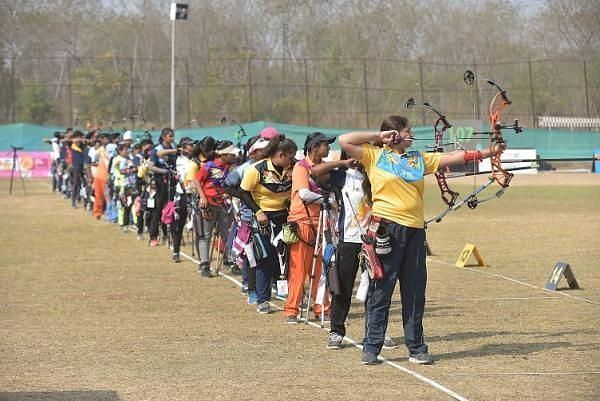 Parth Salunkhe and Ridhi of the Sonepat National Center of Excellence (NCOE) won the recurve men’s and women’s titles in the second edition of the Khelo India Archery Tournament.

Uttar Pradesh archer Kapil took second place in the men’s category while Hurdup Tiriya of the All India Police Control Board (AIPCB) finished third. Kapil was second in the qualifying round while Hurdup was third.

Neeraj Chauhan of Uttar Pradesh led the field in the junior section. He shot 681 in the qualifying round and ultimately the junior title. Sagar Sharma from Haryana and Vinayak Verma from Punjab took second and third place respectively in the junior group.

The competition was also quite intense in the cadet section. The top three ranked archers were neck to neck in the qualifying round.

Agastya of Haryana, who dominated the qualifying round, was the clear winner of the medal round. Ajay Kumar Nagerwal from Rajasthan finished second in the cadet section. Mahesh Kumawet from Rajasthan settled for third place.

During the two-day competition, 307 archers competed in the senior, junior and cadet categories.

“To encourage the archers, individual and departmental teams like the All India Police Control Board (AIPCB) have been allowed to participate in the second edition of the Khelo India Archery Tournament,” said an Association official. Indian Archery (AAI). “The main objective was to give athletes the opportunity to compete regularly at regional level.”