Legislators, MDC, Bass Pro and others honor archery as a Missouri state sport 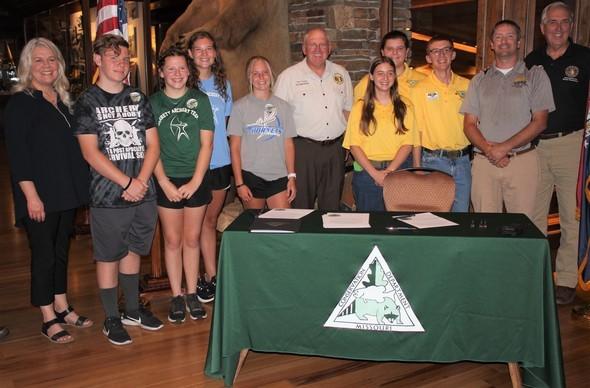 SPRINGFIELD, Mo. – A long history of popularity – both as a hunting activity and as a target shooting hobby – has earned archery a special legislative designation in Missouri.

On Monday, August 8, members of the Missouri Legislature joined staff from the Missouri Department of Conservation (MDC), Bass Pro Shops Outdoor World, Archery Trade Association (ATA), and a number of young southwestern Missouri archers to recognize archery. designation as the official state sport of Missouri. A brief ceremony was held at the Archery Hall of Fame and Museum at Bass Pro Shops in Springfield.

“Anyone can participate at any level, regardless of age, size or physical ability,” said Missouri Rep. Tim Taylor (R-District 48), who launched the initiative earlier. This year. As a longtime archery hunter, longtime archery instructor for the Cooper County 4-H program, and instructor for the Missouri National Archery in the Schools Program (MoNASP), Taylor comes naturally by his love for archery.

“We greatly appreciate Governor Parson and the support of the Missouri General Assembly for the recognition of archery as the official sport of Missouri,” said MDC Director Sara Parker Pauley. “A heartfelt thank you to Rep. Tim Taylor for bringing the bill forward and for his support and interest in conservation and archery.”

Missouri has a strong connection to bowhunting and the archery industry. One of Missouri’s most important ties to archery – the compound bow – is a Show-Me State connection to the sport that is well documented, but somewhat overlooked. Missourian Holless Wilbur Allen, Jr., who lived in Kansas City and later Billings, took a bow that had seen few design changes for thousands of years and, adding extra pulleys and cables to the limbs of the bow, created a type of bow that revolutionized the archery industry worldwide. Allen received a patent for his compound bow in 1966. He then collaborated with archer Tom Jennings to mass-produce the compound bow – the most popular type of bow with bowhunters and archers. today’s target shooters.

Another highlight of the Missouri archery tradition is the Hoyt Archery Company which began in 1931 in St. Louis. The company has earned a reputation for making high quality cedar arrows and remarkably straight bows. Earl Hoyt Jr. was an engineer who turned his skills into a business built around archery and bowhunting. The innovations that emerged from this partnership can be found in today’s high-tech compound bows. Hoyt’s Pro Medalist bows have dominated the scene at four Olympic Games and have also been adopted by archers in many foreign countries. In 1977, Earl Hoyt Jr. was awarded the National Archery Association‘s highest honor – the Thompson Medal of Honor.

MoNASP is another sign of the popularity of archery in the Show-Me State. MoNASP is coordinated by the Missouri Department of Conservation and the Missouri Conservation Federation in partnership with participating schools and numerous supporting organizations throughout the state. Since its inception in Missouri in 2007, MoNASP has been introduced to 960 Missouri schools. MoNASP is affiliated with the National Archery in the Schools Program (NASP) and promotes education, self-esteem and physical activity for students in grades 4-12 through participation in the sport of archery. bow.

And last but not least, archery hunting is also a popular pastime in Missouri. Missouri’s first archery season was in 1946 in Crawford County. A total of 88 archers took part in the three-day hunt. Since that time, the sport has grown in Missouri. Today, more than 202,000 archers take part in the fall tradition of bow hunting; harvesting nearly 60,000 deer a year.

“Archery has a long and storied history,” said Dan Forster, ATA vice president and chief curator. “Missouri’s recognition of archery as an official state sport pays fitting tribute to all who have gone before us and to the hundreds of thousands of active archery hunters and target archers in the Show-Me State who participate in and advance this timeless and shared passion.”