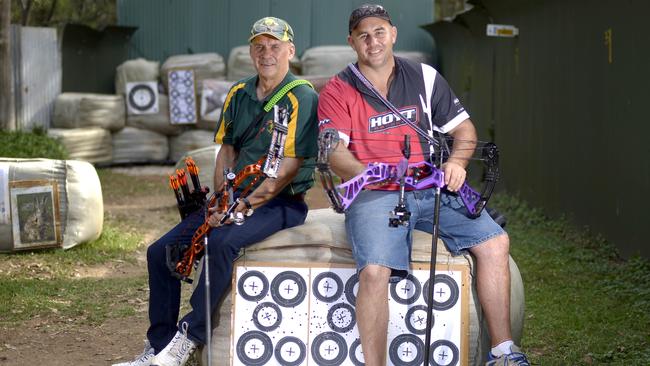 HE conquered the world. Today Justin Olexienko of the Grange Bowmen Archery Club has the â€œHoly Grailâ€ in his sights.

HE conquered the world.

Today Justin Olexienko of the Grange Bowmen Archery Club has the â€œHoly Grailâ€ in his sights.

Desperate to add an individual title to the team trophy he won at the 2010 World Archery Field Championships in Germany, Olexienko fulfilled his dream by rushing for the freestyle crown during the this year’s event in Wagga at the end of September.

The 35-year-old Grange Bowmen member, who has been based at Bridgeman Downs since 1995, was crowned with a silver medal for Father Paul in the veterans division.

He now has his sights set on the famous Vegas Shoot in February.

â€œThat’s three and a half thousand of the best archers in the world in Las Vegas for an indoor shot at 18m. It’s basically my holy grail, â€Olexienko said.

â€œThe target you need to hit is about the size of a 10c coin. Pretty much if you miss one, you’re out. It’s so complete.

Encouraged to start archery as a child due to sight problems, Olexienko said he was always confident he could dominate the world championships.

â€œMy goal was to reach the top three, but I put in a lot of work all year for one event. Everyone wants to win a world championship.

â€œ(Dad and I) used to compete with each other for a long time and it was frustrating. It was always good to see him stand up.

Paul, 64, said he will now focus on state and national crowns for next year.

â€œI thought if I made the top five (at Wagga) I would be pretty happy. There were quality archers from all over the world, â€said Paul, a former member of the Renegade Bowmen archery club in Ipswich.

â€œAfter the first day I was third and I wasn’t expecting it. It was a real sense of accomplishment and satisfaction (to earn the money). It was surreal there for a little while

â€œIt’s a very good clean sport. You are (competing) to get a win but if you don’t, you don’t care. It’s more camaraderie.