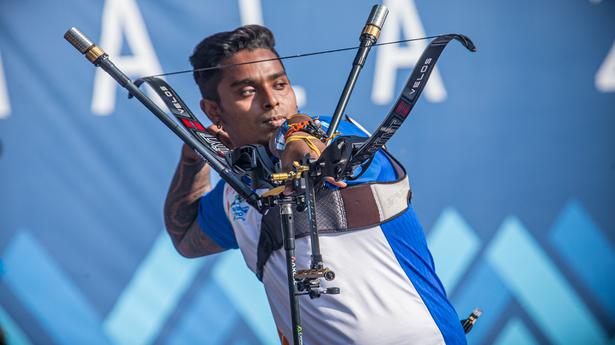 Atanu Das eagerly followed the trajectory of the arrow he shot at the Sanskardham archery range. His last shot in the classic men’s singles final hit the yellow circle and that was enough.

He had already shot two scores of 10s in the final series against Gurcharan Besra, who had two scores of nines. With his last nine, Das had put the tie beyond his opponent. He eventually won 6-4.

He had a disappointing Tokyo Olympics, where he lost in the pre-quarter-finals after beating Korea’s Oh Jin-Hyek – singles gold medalist at the London Olympics – in the previous round. Soon after, Das also lost his place in the national team.

Gold at the National Games came at the right time to rejuvenate the archer’s career, but Das set himself more ambitious goals.

“It feels good to win, but my goal is not just to get gold at the National Games,” he said. “It’s a little more than that. I will not scream and scream. I will do all of this after doing something much bigger.

Archery was everything to Das – especially as the Olympics approached – and he paid a high price for it. “After the Olympics, I felt a heavy burden. I lost twice (in the singles quarterfinals and in the men’s team quarterfinals). We worked hard all year and when you lose afterwards this, you feel like your life is over,” he says.

Das was devastated by the loss and had to take a long break from the match. “After Tokyo, I took a two-month break. It took me two to three months to mentally overcome this loss. I have travelled a lot. I have been to Ladakh and the Maldives. But in my head, there was only the Olympics,” he says.

Despite the injury, Das never thought about quitting. “I never thought of that. The loss is painful, but you have to deal with it and move on,” he says.

Das changed his approach to the game when he returned to training. “I started training in different places. I trained at Shillong for two to three months. I trained in Pune, Jabalpur and then Kolkata as well. I didn’t want to base it on one place. I wanted to give myself as many different filming experiences as possible,” he says.

Despite the changes, the results were not achieved before the National Games. He failed to make India’s squad for four Archery World Cups this year. Das failed to even make the top eight during World Cup trials in March. “I really missed the World Cup stage. My friends from abroad were competing. I really missed wearing the Indian shirt and competing,” says Das.

Instead of sitting around and doing nothing, Das focused on rediscovering his game. “I was just focusing on my preparation for next year,” he says.

The result finally came to the National Games. But, in 10 days there is another round of national rankings, and he has to perform there to return to the national team for next season. “Getting a gold medal here means my preparation is on the right track. But we still have more competitions. We have another national ranking tournament in Hoshangabad in 10 days. If I don’t do well there, they can easily say my performance has dropped and I’m out,” he says.

There is mental anxiety that comes with situations like this, but Das, over the year, has learned to find a balance. “We have a personal life that we forget when we make archery the greatest expectation of our life. I tried to neutralize that. Besides archery, my personal life is also important. I value my personal life and have the right balance,” he says.

Earlier this year, Das and his wife, Olympian archer Dipika Kumari, realized they were going to be parents. Their baby is due in December and Das, like any future parent, is a little nervous about it. “Archery is something I have been doing for several years. So I know how I will manage (my archery career). The other thing (baby) is something I don’t know how I’m going to handle. It is of course a matter of joy but there is some nervousness about what to expect. It’s not something you can prepare for,” he admits.