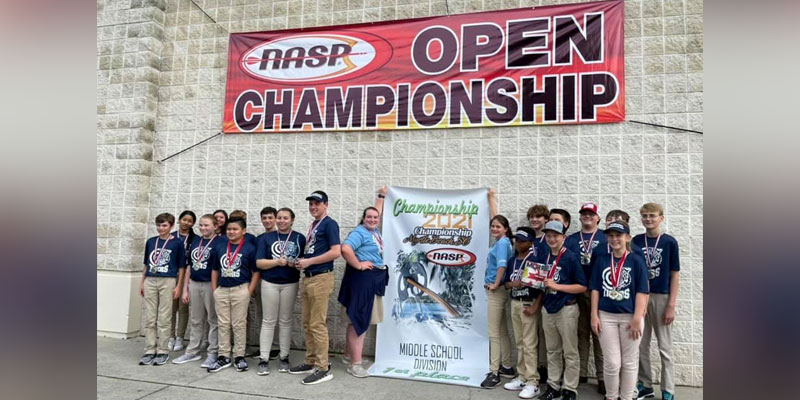 Patience, determination, and focus are some of the skills that the sport of archery teaches students who participate in the National Archery Program in Alabama Schools (NASP). These skills have recently paid off for several Alabama student archers who attended the 2021 NASP Open and Championship in Myrtle Beach, SC from June 10-12.

Almost 2,100 archers from 33 states participated in the event. Of the 93 students from 13 Alabama schools in attendance, four placed in the top three in their respective divisions in the championship portion of the event. Additionally, Causey Middle School in Mobile, Alabama took 1st place overall in the Middle School Division, and Cullman’s East Elementary School placed 5th in the Elementary School Division. Causey also took 2nd place in the general middle school division of the IBO / 3D Challenge at the Myrtle Beach event.

In addition to placing in the Championship, Carrie Daniels, Grace Feenstra, Sandra Shropshire, Jace Law and Ethan Wheat are academic archers. The NASP Academic Archer program recognizes students who maintain high academic results while enjoying the sport of archery. Student archers are nominated by their coaches to be included in the program. Since the program began in 2015, Alabama has consistently ranked among the top five participating states.

Scoring for the Championship is based on Olympic-style target archery in three divisions – Primary, Intermediate and Secondary – and includes team and individual levels. A perfect score for an individual archer is 300 points.

â€œThis is one of the strongest performances ever achieved on the world stage by the student archers of Alabama,â€ said Chris Blankenship, commissioner of the Alabama Department of Conservation and Natural Resources (ADCNR) . â€œTheir determination and dedication to archery and academics will serve them well in other areas of life. “

The NASP was founded in Kentucky in 2002 and has since spread across the country. In Alabama, NASP is a joint venture between the Wildlife and Freshwater Fisheries Division of ADCNR and the Alabama Department of Education. Each year, more than 4,000 student archers from 125 schools across Alabama compete for a chance to qualify for state, national and world championships.

The Myrtle Beach event was the first in-person NASP National Championship to take place since 2019. NASP President Tommy Floyd said everyone involved in the program was delighted to see a return to competition in person.

â€œWe are delighted to be hosting in-person tournaments again,â€ said Floyd. â€œOur whole team loves to see the big crowds and the smiling archers. The last few months have been difficult. Many of our student archers were unable to attend any in-person events due to the pandemic, but we are happy to report that the NASP is back. Congratulations to all of the Alabama archers who competed and made it to the championship.

Ahead of the 2020 pandemic precautions, Alabama hosted eight regional qualifying tournaments in February and early March. Instead of an in-person state championship, trophies for the year were awarded based on regional scores. Much like most office meetings across the country, the NASP National Championship has also gone virtual, allowing students to shoot in their school’s gymnasium under the observation of a neutral adult. These scores have been verified and counted for a virtual ranking. Teams that competed in the Virtual National Championship were then eligible to compete in the Myrtle Beach in-person event.

Lisa Counselman, archery coach at Causey Middle School, said the pandemic put a damper on last year’s season, but her team were determined to make this season as normal as possible. The extra effort put into security measures allowed the team to focus on preparing for the event. These efforts paid off as four of his archers made it to the tournament and earned them top honors in the middle school division.

“It was the first time Causey had brought a team to the championship,” she said. â€œWe started our season in July 2020 and worked non-stop until the event in June 2021. We knew from the start that we were having a tough competition so taking the 1st place in the teams was an incredible feeling. When I saw the updated scores, I was overwhelmed with emotions.

Coach Counselman praised his champions who are heading into 9th grade this fall.

â€œGrace Feenstra, who is one of our team captains, and Hunter Horton were in 8th grade when they competed in the event,â€ she said. â€œSeeing them shoot so incredibly well made their wins even more special. It was their first trip to the championship and they really made it count.

In addition to taking 3rd place in the college girls ‘division, Feenstra placed in the top five in the girls’ division overall, making her eligible to enter a scholarship competition.

â€œIt was very exciting to watch,â€ Counselman said. “She got over a lot of nerves and walked away with a $ 1,000 scholarship that she can use for any college she chooses.”

Coach Counselman has also recruited excellent 5th year archers from Dawes Intermediate to accompany the Causey team to the championship. One of those fifth graders was Jace Law.

â€œJace took lessons with coach Joshua Clarke for two years and also attended bullseye and 3D practice with Causey prior to the championship,â€ she said. â€œHe is very motivated and motivated and has worked very hard to achieve this goal. “

This fall, Jace will be starting Grade 6 at Causey and officially shooting his bow for the school’s archery team.

Carrie Daniels also trained with Coach Clarke. He is very proud of his 1st place in the college girls’ division at the Open and at the NASP Championship. A former student archer himself, Coach Clarke shot for Alma Bryant High School in Irvington, Alabama from 2009-2012 and knows how tough the competition can be.

â€œI am proud of Carrie and her hard work,â€ he said. “She’s come a long way since she started.”

As a student at Alma Bryant, the future coach would visit various Irvington-area schools throughout the week to help other archers hone their skills. Coach Clarke said the experience helped him grow as a leader. Today he is working on imparting these types of life skills to his students.

â€œI hope my students learn that teamwork and determination pays off,â€ he said.

This year’s big wins at the Open and at the NASP Championship are exciting, but there is more good news for NASP archery students in Alabama. The Alabama NASP State Championship returns to the Cramton Bowl multiplex in Montgomery, Alabama on April 7-8, 2022. During the event, the ADCNR will award up to $ 10,000 in scholarships to archers qualified. To learn more about the State Championship or how your school can start its own archery program, visit outdooralabama.com/programs/alabama-archery-schools.